Eastern Oysters are at peak quality in January and February. If you are planning an event, add an Oyster Bar. Our chefs will produce a trendy style of oyster toppings and condiments. 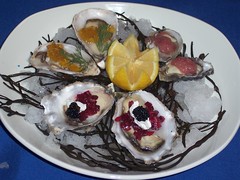 In 1859, residents of New York City spent more money on oysters than on butcher’s meat.

A fine purple thread should run around the beard of the oyster, this being looked upon as a sign of superior quality.

Is there anything more American than corn fritters and oysters?

In 1880, Chesapeake Bay was producing fifteen million bushels of oysters each season.  That is mid September through March.1

The oyster shell is divided into two halves and for reasons only known to the oyster, its body lies in the left valve.  Valves are called the two half shells of the oyster and it is connected with a powerful muscle with opens or closes the shell.  That muscle is the challenge when we try to shuck an oyster.  They thrive in brackish water, living in bays, coves and estuaries where currents supply food – plankton and tiny larvae that the oyster strains through its gills.

It is amazing to know that one single oyster can pump up to one hundred gallons of water through its valves in a day.  To keep a bed of oysters fat and content there must be a great deal of tidal action.  Chesapeake, Apalachicola and Tomales Bays are all excellent feeding grounds for a great oyster. 1

Today oyster samplers in restaurants and at parties enjoy great popularity.  Chefs have created multiple choices of toppings and flavor enhancers who gain more weight when we marry oysters with wine and champagne.  Here are some of our most popular suggestions from the kitchen of the Valley Mansion by Martins:

Add all ingredients for the red wine granite into a saucepan and simmer for 8 – 10 minutes. Pour and strain into a pan and freeze. Remove from freezer and whisk until light and fluffy.

Cut the beets and shallots into brunoise (fine dice) and place in a saucepan with the Pinot Noir, rice vinegar, soy sauce and ½ cup of water. Cook beets until all liquids are reduced by 2/3rds. Remove from heat and add oils. Refrigerate. Before service, mix in toasted sesame seeds.

In a pot, combine ver juice, sugar and agar-agar and let sit for 10 minutes, and then bring to a boil. Pour into a dish to about 1/8 inch deep. Refrigerate until set.

Place ice and seaweed on plate; put 2 of the 3 different kinds of oysters on ice. Set granite in one dish, beet relish with sour cream and caviar in another dish, and ver juice gelee in a third.

We’ve been making people happy for over 55 years. Rely on our experience to make your event a total success.

END_OF_DOCUMENT_TOKEN_TO_BE_REPLACED

All of my out of town guests were really impressed with the reception hall. Thank you so much for a job well done.

Contact us today and allow one of our event planners to help you arrange the perfect menu.